skip to main | skip to sidebar

In reading about the "Cash for Clunkers" program in the papers, I was initially opposed because it continues supporting the use of cars and not mass transit (and bikes, walking, etc.). But in reading this section in the Wikipedia entry on the bill, I'm even more opposed to it. Here is a snippet of the environmentalist analysis:

Unbelievable! So, in the end, "Cash for Clunkers" is just taxpayer money wasted on more corporate welfare for the polluting auto industry and an award for both past and present irresponsible consumer behavior. 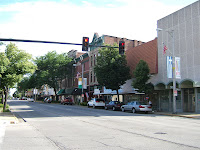 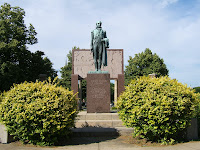 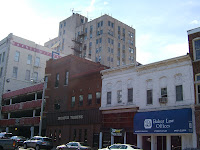 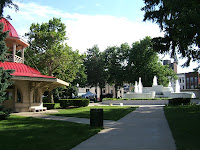 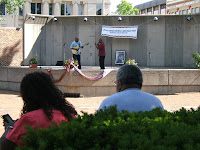 A good friend of mine told me that I made Decatur look too dreary with just pictures of the Staley plant in the last post. So here are some pictures I took walking downtown, around and about, and at the Juneteenth Festival.

Just so you know, the memorial statue is of Stephen Decatur, where Decatur gets its namesake. I was surprised reading the inscription, though. It says something to the effect, better that your country be in the right, but if not, my country right or wrong! (If you click on the picture and examine the larger version, you can actually read yourself what the inscription says.)
Posted by Corey at 8:53 PM No comments:

An afternoon in Decatur, Illinois 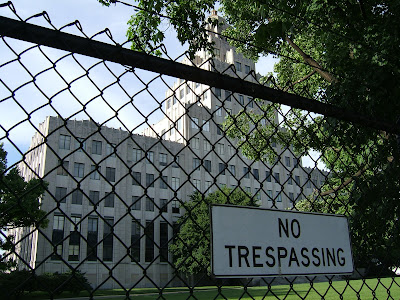 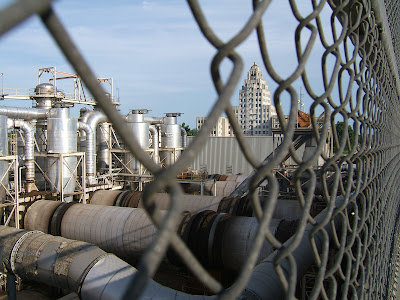 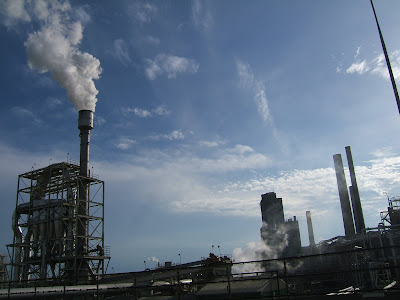 A few days ago I decided to head out for Decatur, check out some independent bookstores, and reflect upon the Madison college days when I traveled down here with the Student Labor Action Coalition to support the Staley strike. Today, Saturday, I made a day of it, taking in the sights. Decatur looks much like I remember it back then. It seems much more of a working-class town than Bloomington-Normal, with a much larger industrial base, with a much more diverse working-class. The town itself seems bigger than it appears on the map. I actually had to just look up the population to be sure it wasn't bigger than Bloomington-Normal. At around 80,000, it is about the size of Bloomington alone; its metropolitan area is about 2/3 the B-N metro area, so they are comparable.

My main purpose was to check out Cheryl's Old Barn Bookstore and Novel Ideas Bookstore, two indies in the Decatur area. After Novel Ideas, I ate downtown, walked around a bit taking pictures, and happened upon the Juneteenth Festival in a park in downtown Decatur. I then headed out to the A.E. Staley corn processing plant, owned by Lyle and Tate, the scene of a couple of very large demonstrations in the 90s around the Staley strike. At the time, the labor movement was calling Decatur "the War Zone" because the town had three high-profile strikes occurring simultaneoulsy: Staley, Caterpillar and Firestone/Bridgestone. There was so much hope around the Staley strike because the workers and their union had reached out for solidarity and groups of students organized on campuses to support them. In fact, the spread of SLAC groups and similar labor-focused student groups had its start with the Madison group organized around Staley. When going to Decatur, I remember seeing a lot of labor activists there, including the precursor to the Labor Party, Labor Party Advocates. The first time I went, there was a standoff between labor unionists and police at the gate, which led to tear gas, a scene that came to represent the struggle and can be found in different sources. My pictures included here show the scene there today. In walking by the plant, past the Staley headquarters building, and over the bridge that traverses the innards of the processing plant, you can't help but feel sick from the industrial hell that surrounds you. For me it gets connected to the defeat imposed on the workers there: slashed pay and benefits, imposed 12 hour shifts, etc. The nauseating feeling inside is compounded by the sickening smell of the corn being processed, a sweet smell that reminds one what our Millers and Pepsis are made out of. (It smells like Miller or Coors beer to me.) Anyway, when people say our food is filled with corn syrup, A.E. Staley is where it is being produced.
Posted by Corey at 8:43 PM 2 comments:

I've started some new blogs in the past week, which has been taking most of my time and keeping me from some important projects for work! Here are their links:
Corey's Indie Bookstore Travelogue
Corey's Health and Fitness Diary
Spanish Schools Abroad
I think after these three extra blogs, I'll be all blogged out!

First off, I support movements for democracy, whether in Iran or here in the U.S.

But the current coverage of the Iranian election by the U.S. corporate media, and the rulers it serves, is very revealing when you compare it with their coverage of other democracy movements. Immediately, U.S. rulers made pronouncements on the need for democracy in Iran, and that there might have been voter fraud, when they routinely ignore glaring cases of election fraud here and abroad.

For example, in the last presidential election in Mexico, there was much evidence produced by the Partido de la Revolución Democrático (PRD) that the election there was stolen for current president Felipe Calderón. Huge protests rocked Mexico City for weeks. But here in the states, immediate recognition was granted by the Bush administration. Since the Mexican government is a "friend" of the U.S. (read: they serve our interests), it was inevitable that immediate recognition would be granted no matter who was in office. (Obama would have done the same.) I don't want to suggest that there wasn't fraud in Iran. My point is that the U.S. government, and the bourgeoisie it represents, has blatant tunnel vision when it comes to justice.

The most hypocritical statements coming from the ruling elite are those of Joseph Lieberman:

“Through intimidation, violence, manipulation and outright fraud, the Iranian regime has once again made a mockery of democracy and confirmed its repressive and dictatorial character,” Lieberman said.
The hawkish Democrat-turned-independent added: “I would hope that President Obama and members of both parties in Congress will speak out, loudly and clearly, about what is happening in Iran right now and unambiguously express their solidarity with the brave Iranians who went to the polls in the hope of change and who are now looking to the outside world for strength and support.” (Politico, Real doubt on Iran election, 6/15/09)

This rings hollow coming from Lieberman, who with Gore, did not fight here in the United States when evidence suggested that the presidency was stolen from them in 2000.

In a different vein, with the violence that has occurred in Iran, we would expect that if similar violence was committed in the U.S. during a demonstration, the government here would condemn the entire movement and blame it for that violence even committed by the state. 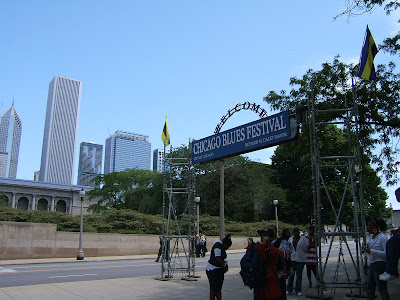 The Chicago Blues Fest this year, my first, was impressive to say the least. Click here to get my Flickr pictures of the festival.

Gotta' start making my plans to attend next year!
Posted by Corey at 9:23 PM No comments:

So, after much anticipation, I'm heading to Chicago tomorrow for the Blues Fest! Since I'm traveling light, really light, I won't have my computer with me and won't be blogging for the three days. But, hopefully, I'll have loads of pictures I can share on Monday....
Posted by Corey at 9:59 PM No comments: 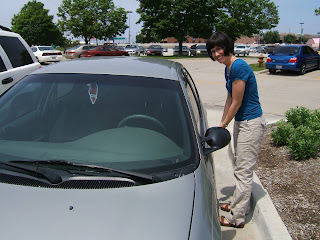 I took this picture of my partner in route between 2 summer trips. Actually she has been traveling for 3 weeks now!

She spent 2 weeks traveling in El Salvador and happened to be there for 3 historical events - the transfer of state power from the extremely right-wing ARENA party, which ruled for 30 or so years, to the left-wing FMLN; the major earthquake (7.2 on the Richter Scale) that rattled the country from its epicenter in the ocean off Honduras; and the Salvadoran soccer victory over Mexico, a major upset that boosted national pride after Salvadorans endured insult after insult from the Mexican press.

Now, she is heading to Cincinnati to work for the evil empire of the education world - Educational Testing Service (ETS). (In case you are reading this, ETS, this is my opinion, not hers!) At the very least, it's good money for 1 week's worth of work. In the picture, she is getting ready to take off for Cincinnati, after just returning from El Salvador.
Posted by Corey at 10:02 PM No comments:

Everything Klein said in this video before the election about the need for social movements is still relevant now. Where is Move.on and countless other anti-Bush groups in speaking up against the Iraq and Afpak wars? In opposing the bailout for the rich? In supporting one of the few movements on the ground, that for single payer health care? 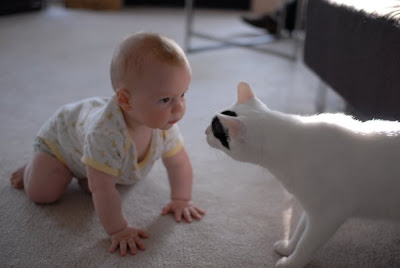 This picture my partner took, during her friend's visit here, is so amazing I had to share it.
Posted by Corey at 11:07 PM 1 comment:

The Normal Theater - Not so normal

The Normal Theater is a real gem. I've been to small indie theaters in a number of cities - Madison, Tucson, Austin, Minneapolis - and none of them come close to its quality. First, I've been very impressed by the quality of the movies, in that it shows a perfect mix of new and classic options, changing flicks every week on average. For good measure, the theater itself looks great and is very well-maintained, supported by an active membership. Every time I've attended a movie there, the crowd was a decent size, a big surprise for me, since in Tucson and Minneapolis I would sometimes be the only patron in similar establishments.

Just this last Sunday I headed down there and saw Everlasting Moments, directed by Jan Troell. All in all, a superb movie shown in an outstanding venue.
Posted by Corey at 12:02 AM No comments:

This is a sad day for those of us who believe in women's rights and reproductive freedom. Dr. Tiller's assassination is a tragedy that we must not forget.

Heading toward socialism with Obama?

Here in the heartland of McLean County, Illinois, where I've been told we have a good percentage of apostolic and evangelical Christians, it seems relatively widespread to view Obama as a socialist. Let's review some highlights of Obama's presidency so far and see if his policies are more socialist or status quo.
So, is that socialism?

Conservatives might think Obama is a socialist because, for them, increased government spending or involvement in the economy is socialist. But any understanding of Keynesianism deficit spending, including the Reagan military Keynesianism of the 80s, should dispel that notion.

This article in Business Week, a mainstay of the bourgeois press, exposes the massive gulf between Obama and socialism. However, maybe the socialist charge works well with their base.

For us on the left, in saying Obama is like any corporate politician before him, the point is not to crush our hope. There is hope in the building of democratic social movements, and hopefully the initiation of a party built on working people, outside of corporate control - a labor party or socialist party.
Posted by Corey at 9:00 PM No comments:

Click here to get blog entries covering interesting aspects of the Bloomington-Normal area.